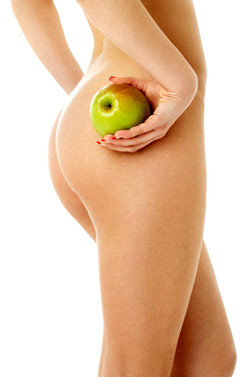 A person’s body proportions and silhouette is mostly domainated by one’s waist, hips and buttocks. There are considerable ethnological differences, as well as different views on what is considered sexy or attractive.

As times change, so does the notion of what are attractive body proportions.  In the past, larger buttocks were viewed as an expression of fertility and maternal power, a therefore a more volumnous behind was quite desired in the middle ages. In modern times, there was a significant change to somewhat narrower proportions in relation to the shoulders and chest width, where in the 1960s came the ultimately opposite extreme the notion of attractive in form of the “Twiggy”model.
Ultimately, what matters the most are the opinions and personal perceptions and preferences, making the notion of what is aesthetic a individual’s choice.

Today, it is common for men to desire a muscular and firm behind, while women are more commonly desiring a more shapely, rounded and well proportioned to the hip width, behind.
Just like many other areas of our bodies, the buttocks are also limited to influences, most popular through intense and targeted training where one builds-up a gluteus muscle in order to get the lifted and firm buttock effect.  However, there are two other possibilities in which the same results can be achieved:

Fat injection:  After removing fat from an undesired area of one’s body, it is then once again injected into the same body, in the subcutaneous area of the buttocks, including the muscles. One can reach desireable results and lasting contours with this procedure.  However, this procedure cannot guarantee nor predict whether the given fat cells will grow back into the tissue and remain there permanently.  This procedure has seen great volume and shape improvments, with cases between 300 ml to 500 ml increase in volume per side.  This procedure requires a general anasthetic and about two (2) hours long surgery time.  Afterwards one must wear a compression bodice and a quiet physical period (no fitness work out, running, climbing, etc.) for healing. There are usually no long term complications.

The Second possibility is the introduction of:
Silicon Implants (similar to breast implants). During this procedure a small incision is performed in the upper fold of the buttock so that the implant can be placed between the large and medium gluteus maximus.  A permanent increase in volume is achieved. As with breast implants, the risks of a capsular contracture can occur.  The surgery takes about one and a half (1 ½) hour, includes general anesthesia and requires a 2-3 days hospital stay. This procdure is also known to have initial pain afterwards, depending on the individual cases.  The healing process is short and requires wearing compression pants.  The results is a permanent improvement of the buttocks volume and shape.