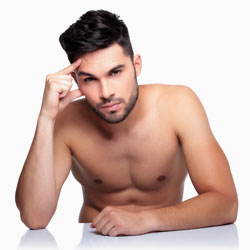 In medicine, the excessive growth of the male breast is called gynecomastia. During puberty, hormonal changes cause conditional swelling of the breast, which often later regresses.  However, in some cases the breast volume remains creating the effect of large breasts.

This usually results in the unwanted presence of glandular tissue or fat accumulation in the subcutaneous area.

Accordingly, there are distinctive differences between the “real“ gynecomastia and a alleged gynecomastia.

When the male breast is large due to the overgrowth of the glands, this is referred to as “real“ gynecomastia.  The alleged gynecomastia is a result of local fat accumulation.  Often, men deal with both findings.

In most cases, the problem is permanently eliminated by performing liposuction.  However, the removal of the glandular portion is also important, performed by surgically removing the tissue behind the nipple through a small incision made around the edge of the areola.  This procedure is usually performed with local anesthesia.  After injecting the “tumescent solution”, fatty tissue is removed using a cannula through a small puncture site, ultimately resulting in no or insignificant scars.